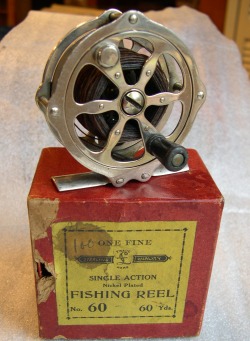 This skeleton fly reel can sometimes be found with the British pound sign and the words "Trade Mark" on the back, identifying it as a Sterling trade reel, the name used by the H.A. Whittemore Co. of Boston. This reel and tackle retailer operated from 1901 to the mid-1970s and sold reels made by Montague, Pflueger and others. This example of a Sterling reel is unmarked but the box identifies it as one of Whittemore's reels. 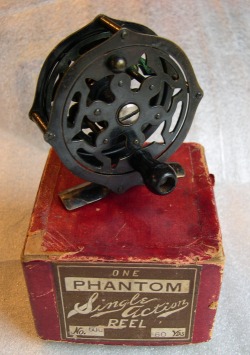 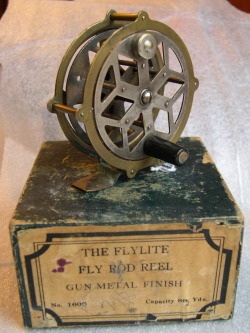 Chances are, you've seen this reel many times and, because this style of reel is rarely marked, you had no idea who made it. The answer? Bronson, a major fishing tackle maker for decades. Bronson produced this reel with some variations, but the shape of the spool cutouts and the straight tapered handle style are tipoffs to this being a Bronson product. In some cases you'll find this reel stamped "Beacon" on the back and, in even rarer cases, you might find it in this type of marked box. Flylite skeleton reels have been found with black, red or dark green handles. 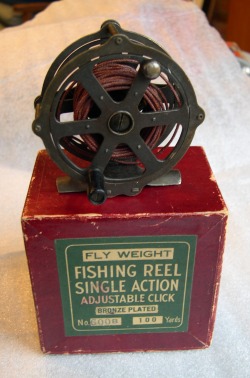 Montague was one of the world's largest manufacturers of fishing rods and reels at one point. Many Montague reels were produced in western Massachusetts and countless Montague reels were made in Brooklyn, N.Y. Among the scores of models Montague produced was this handsome reel. It can be found in gun-metal finish, like this example, or nickel-plated brass. It is also easy to identify this style of Montague skeleton fly reel, even though the company didn't stamp a name or maker on the frame. The Montague skeleton is stamped either 50 or 100 under the foot (unlike the vast majority of other skeleton reels which, is stamped with yardage under the foot are marked 40, 60 or 80). The reel also has triangular spool cutouts, a somewhat unusual ball-shaped spool counter balance button and a handle in either black or white plastic with a straight design that has a slight indentation on the end nearest the spool. Montague also made a reel in this same design that was stamped "Rapidan" on the back, with the Montague leaping fish logo. That reel has been found in the 100-yard size and was made of "duralum," the name Montague used for aluminum. 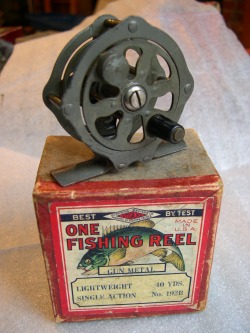 A reel sold by Horrocks-Ibbotson in the 40-yard size, marked under the foot with an underlined number 40. The underlining indicates this reel was made by Winchester. The box is one of the better examples of great graphics that can be found on fishing reel boxes. 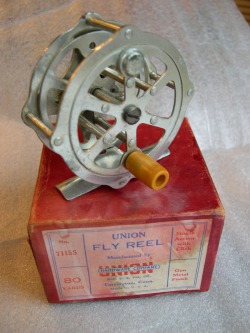 This is one of the later skeleton fly reels made by Union Hardware, a Torrington, Conn.-based tackle manufacturer. Earlier skeletons were made of brass or nickel-plated brass and usually had wooden knobs, painted black. This reel was made from aluminum and had a plastic knob. Almost all Union Hardware fly reels are stamped with the company name on the back and many include a model number there as well.