This type of fishing reel allowed the angler to slide the clamp onto a rod, then tighten the thumb screw to secure it. Clamp reels are shown in some of the earliest tackle catalogues and were made and sold well into the early part of the 20th century. Some of the earliest clamp reels were made in England and date circa 1825. I am always interested in seeing photos or acquiring unusual clamp reels, especially those marked with a maker's name. I can be contacted via e-mail at reelnewseditor@yahoo.com 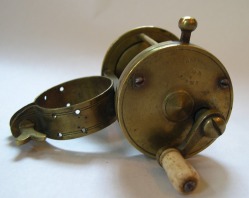 James Haywood was a reel maker and brass founder in Birmingham, England, who made and sold reels marked with his name in the first quarter of the 1800s. This reel is stamped on the front plate "Haywood" and the letters H and R with a star in the middle. 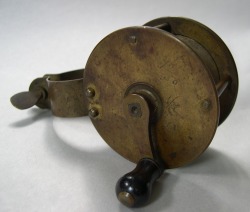 Abbey & Imbrie was a large New York City tackle house that came into being in 1875 when it took over Andrew Clerk & Co. A&I reels can be dated by studying the stamped logo of crossed fish hooks and the position of the letters A and I, among other things. This clamp reel can be dated to the late 1870s, based on the logo. A very good reference and history of A&I can be found in The Origins of American Angling, by Mary Kefover Kelly. The book is available through Whitefish Press (www.whitefishpress.com). 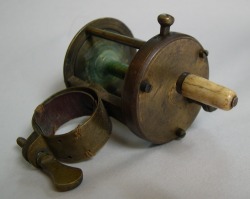 This multiplier clamp reel shows the stop/check button on top, which locks the spool in place when in one position and allows it to run freely in the other. If you look inside the clamp you can see a strip of leather, "sewn" in using the holes punched into the clamp rim. Clamp reels are sometimes found with this strip of leather, which probably helped keep the reel from slipping or turning once it was clamped onto a rod. 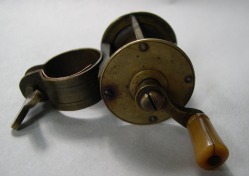 This clamp reel is unusual in that the front plate is only about 1 1/4" across. The reel is a single action crank, as opposed to a multiplying reel, shown in the photo above. 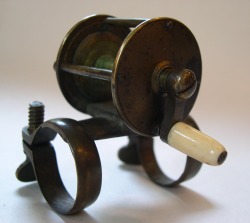 This unique reel appears to be a simple brass click reel with each end of the foot soldered onto a clamp, making the reel especially secure on a rod. The reel appears to be an early British-made example and the two clamps were added on quite some time ago, judging from the patina on the brass.